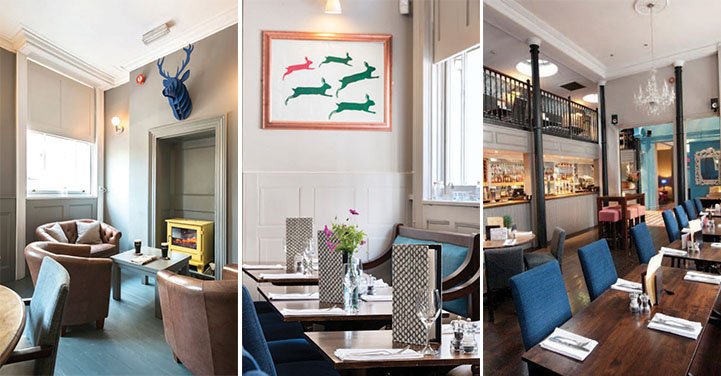 The dispensary is a historic building situated in the heart of Aldgate City of London dating back to 1859, an eastern dispensary attending to the poorest of east end. The building has retained most of the original features including a stone staircase leading upstairs to chef’s kitchen lunch club dining room. Co. owners Annie Smith and David Cambridge acquired the building in 2006 and set to work by creating a casual pub and dining room.

David, a trained chef with the Rothschild family was now following his passion of brining array of fine food to the casual dining scene. During this time the regeneration of Aldgate environs was underway and new residents were spilling in from Shoreditch and city as a result of an upshot of new apartments and office buildings. David and Annie decided it was time to redesign their interior to create more salubrious surroundings to tap into the new market. They contracted award winning interior designer Jackie McWeeney who had undertaken other projects in the area. After a period of difficult trading economic conditions this was to be a low scale budget project. However, interior designer Hakie McWeeney with a passion for period properties, immediately identified the potential and ideas were formed.

Aldgate was now a mixture of sophistication and renewed vibrancy and Jackie decided this would lead the way in the design. The power of paint would be used to transform the interior in creating different moods for different purpose. Lighting would also be accessed. Existing furniture would be up-cycled with high end fabric offering a twist of vibrancy in colour.

In terms of branding the uniqueness of David and Annie and their renowned hospitality would filter into the scheme to create a home from home environment. Colours were selected from Farrow and Ball to pay homage to high ceilings and large dining space. At the time new colours were launched and this was to provide a contemporary feel.

Colours for the main bar dining room were a mix of light and shade. The darker colour being Stiffkey Blue to create an atmosphere for evening drinks and dining whilst Purbeck Stone a paler colour offering a lighter mood for lunch time. Original shutters were pulled out from behind disused casings and painted again in the lighter shade of Purbeck Stone to stream-line the windows and the wall.

The wooden floors were sanded and stained in a dark walnut. The bar was originally pine and this was sanded and painted in a drab colour called Moles Breath. Out went the dusty ceiling fans to be replaced by two glass chandeliers. Wall lights were replaced with an Italian style round shades with the base painted into the wall. The entrance hall used a vibrant colour St. Giles Blue to create a colour that would be inviting and contemporary in working with the high ceilings and cornice. The drab colour, Moles Breath was taken into a pre drinks area which was accented by a wood burning stove and splashes of a colour called Yellow Cake. By day this colour created urban chic and by evening it has a more stately home feel. Softness was brought in by beautiful fabrics from Fermoie – although a luxury brand only small amounts were required to create softness on the existing seating. Irish linen in muted browns was the staple fabric again used though out the scheme. Finishing touches were added with beautiful menu covers picking up all elements of the scheme. Art was provided in house with pieces of white fabric used as a canvas to create splashes of colour on the walls. All created my a member of the hospitality team at the dispensary.

SUCCESS OF THE DESIGN

We are pleased to acknowledge 25% increase of profits since the redesign of The Dispensary. Further scope for business is being implemented due to working with Jackie McWeeney Interior design.